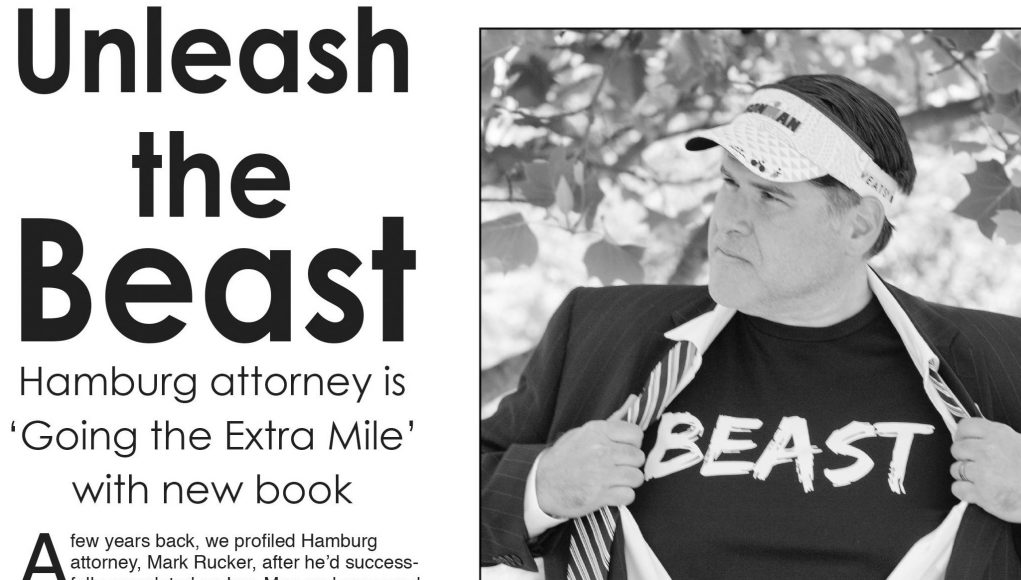 Unleash the Beast: Hamburg attorney is ‘Going the Extra Mile’ with new book

A few years back, we profiled Hamburg attorney, Mark Rucker, after he’d successfully completed an Iron Man and appeared on the Today Show with Joy Bauer.

He recalls the story, “My journey all began when I was unable to fit onto a rollercoaster with my daughter at Dollywood in 2010. I was determined after that to get in shape so that I could be an active participant in the lives of my wife and children, rather than a spectator observing life pass me by while standing on the sidelines.” In the two years since, he’s worked to combat a diagnosis of rheumatoid arthritis with a nutritional plan, and he’s written a new book (out in June), “Unleash the Beast: A Journey to Rediscover the Greatness Within” He describes it as the chronicle of his “transformation from a 385-pound Couch Potato to an Ironman and the principles that I developed along my journey that allowed me to change my life and how you can apply those same principles to change any aspect of your life.”

He’s partnered with Arthritis National Research Foundation and has committed 10 percent of the proceeds of the new book to the Foundation. He says, “Dealing with Rheumatoid Arthritis for the past two years has truly impacted my life in every way imaginable but I know that together we can raise money for much needed research.”

He didn’t let the outcome of his first IronMan keep him down for long, but believes that “failure” helped shape his later success. Asked to remember one bad moment he didn’t think he’d recover from, he says, “Sitting in the grass on the side of Old Ballard School Road somewhere in Henry County, Kentucky at Mile 48 of the bike ride in Ironman Louisville in 2012. I ended up having to withdraw from the race and I didn’t know at that point if I’d be able to continue on my health and fitness journey. It was a very dark point in my journey and it took me months to recover from the overwhelming sense of failure I felt.”

He later completed the Louisville IronMan and then appeared on the Today Show with Joy Bauer, whom he describes as “one of the nicest, most sincere people I’ve ever met. I’ve met celebrities before who could care less to speak to you but Joy really is so different. She treats you like you’ve been friends for years and really goes out of her way to get to know you.”

Bauer says,  “Mark is a real inspiration—not only in the way he transformed his life, but also in how he’s now looking to share his success to help others achieve their goals. Mark’s journey from couch potato to Ironman is both emotional and powerful, and the lessons he learned along the way are invaluable for anyone looking to make a change in their life.”

Father’s Day this year might not look like the celebrations of recent years. He says, “I’ll be on vacation with my wife and kids so I’m sure we’ll come up with something fun to do. I’m on a very strict nutritional plan now as part of my treatment for my RA from my doctors at the Cleveland Clinic so food will not be a major part of the celebration.”

As for gifts that might be on the docket, he isn’t concerned, saying he’s not much of a “‘things’ kind of guy,” but he has a special place in his heart for “a copy of a magazine article that my dad gave me for Christmas in 1985 when I was 17 years old, on the verge of graduating from high school and beginning my life’s journey. The article was called ‘Going the Extra Mile” and it talked about the importance of being willing to go the extra mile in all that you do to help others. He wrote a personal note at the top of the article telling me that he hoped that I as I ventured out onto life’s path that I would take the lessons in the article to heart. This past Christmas, 2015, 30 years after he gifted that article to me, I made a copy of it and gave it to my 17-year-old daughter, who is graduating this year and on the verge of beginning her own journey. I wrote my own personal note at the top, alongside the note my father wrote to me. From a cost standpoint it may have been the least expensive gift I ever received, but to me it is priceless. And I hope that 30 years from now, my daughter can share that article and the wisdom it contains with her 17 year old child.”

His personal health and wellness philosophy is, “Small steps. None of us who have battled with weight issues got where we are overnight. And we can’t improve things overnight. It takes time and commitment. But by focusing on achieving small steps it allows us to nurture a sense of self-belief that propels us forward.”

He recalls the best advice he’s received on his path to health, “After I was unsuccessful at Ironman Louisville in 2012, my wife and I were very fortunate to win a trip to Hawaii to watch the Ironman World Championship in Kona. While we were there I had the honor to meet Lew Hollander, who at 82, was the oldest competitor at the race. I’d been a fan of Lew’s for some time and I got the opportunity to share with him about my failed attempt at IM Louisville and that I was really struggling with it. He just looked at me and said ‘It’s tough. But if it’s important to you, don’t give up.’ His words resonated with me and have stuck with me ever since. Most things that are worth achieving are very hard at times, but if it’s important enough, then giving up is simply not an option.”

Excerpt from “Unleash the Beast: A Journey to Rediscover the Greatness Within”

“‘I’ll never forget the bus ride back from LaGrange to downtown Louisville in 2012. I can still feel the hot summer air blowing from the open window a few seats in front of me. I can recall the constant chatter from the other people riding the bus with me that day. I can still smell the diesel fumes from the engine.

Thinking back on it now, I couldn’t tell you a single thing about any of the people with me—who they were, what their names were, where they were from. I knew one thing about them all—actually, about all of us, myself included. I knew where we were headed and I knew why. On that hot August day, we were headed back to the drop-off point for drop-outs of Ironman Louisville.

I felt like a loser, a failure. My family and friends were waiting for me. I was so embarrassed—how could I face my wife? My friends? All the people who had supported me over the past 18 months? Even worse, how could I face the people who had doubted me? Now they could say that they’d been right, that I wouldn’t be able to do it, to achieve my dream of being an Ironman. They were right and I was wrong.

That was the longest bus ride of my life.”

This article also appears on page 8 of the June 2016 printed edition of the Hamburg Journal.