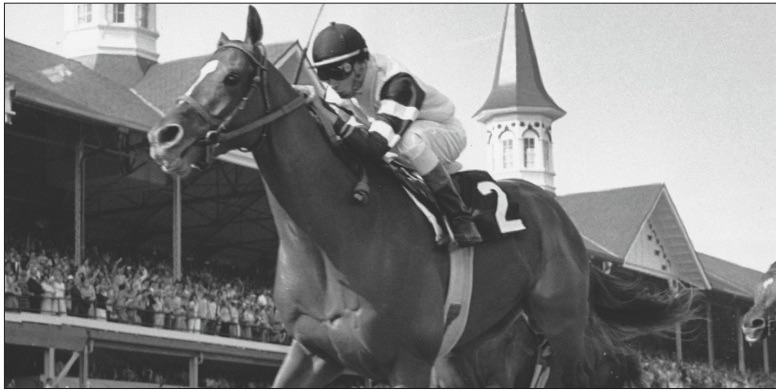 A record breaking 170,513 spectators showed up to watch American Pharoah take the roses at the 141st Kentucky Derby in Louisville last month. Pharoah was the 5-2 favorite to win the race and he covered the track in 2:03.02. This was his fifth victory in a row, including an eight-length Arkansas Derby win. The victory increased his lifetime earnings to $2.8 million. As of press, he was a contender to be the first thoroughbred to win the Triple Crown since Affirmed in 1978.

The history of the Triple Crown is closely tied to the Hamburg Pavilion. Sir Barton, the namesake of one of our major roads, was actually the first Triple Crown winner. There have only been ten other Triple Crown winners in the century since then, including legends Seattle Slew (1977), Secretariat (1973), and other Hamburg namesake War Admiral (1937).

Sir Barton was born on April 26, 1916. He was sired by leading stud Star Shoot and mare Lady Sterling. His grandsire, Isinglass, was the 1893 English Triple Crown champion.

The reason that Sir Barton is such a household name in Lexington (and has a major road named for him) is that he was bred right here in Lexington by John E. Madden, at his legendary Hamburg Place Farm.

Madden’s 235-acre farm, which occupied most of the land where we live and work today was named Hamburg Place, in honor of Hamburg, the first horse that John Madden purchased and set about turning into a record breaking racehorse.

Sir Barton was arguably the most complete product to come out of the Hamburg place farm. He started off slow, though. The colt was raced six times during his two-year-old season, winning none.

At three, Sir Barton made his season debut in the Kentucky Derby. He was supposed to be a pacemaker for his more promising stablemate, a thoroughbred named Billy Kelly. However, Sir Barton never let up on the pacemaking, leading the field from start to finish and winning the race by five lengths.

Just four days later, Sir Barton won the Preakness by four lengths. Shortly after, he set the American record for the Belmont Stakes and became the first Triple Crown winner. He has been retrospectively honored as the 1919 Horse of the Year. He was inducted into the National Museum of Racing Hall of Fame.

And now you know a little more about the history of our beautiful neighborhood.

Have a piece of Hamburg history you want to share? Email us at info@hamburgjournal.com.

This article also appears on page 5 of the June print edition of the Hamburg Journal.