Home Features Have some beaten biscuits for Derby 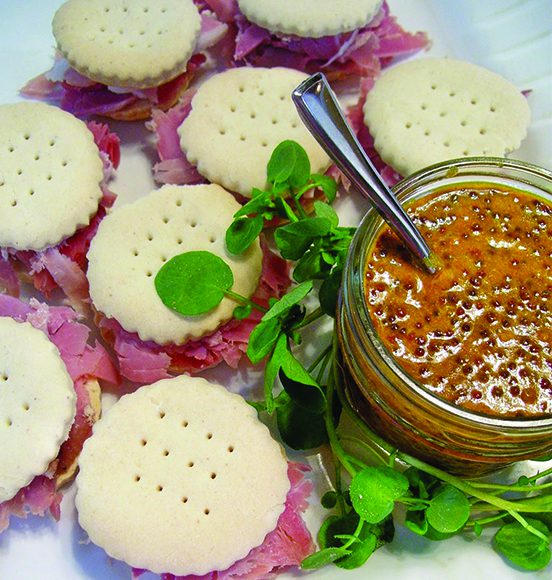 It’s time for Keeneland here in the Bluegrass and the Kentucky Derby is right around the corner. Let the parties begin.

During the week leading up to the big race, it’s all about bourbon and classic Kentucky fare. Steeped in tradition, platters of beaten biscuits filled with shaved country ham will appear at Derby parties alongside roasted beef tenderloins with Henry Bain’s Sauce, bowls of burgoo, benedictine tea sandwiches, miniature Hot Browns, and versions of chocolate walnut pies. Kentucky Proud.

I’ve always had a thing for beaten biscuits this time of year. With their crisp chewy texture, beaten biscuits stuffed with country ham are perfect bite-sized party snacks. While they appear dainty and delicate, they’re quite the opposite.  Unlike their familiar flaky soft-dough counterparts, beaten biscuits are more like crackers or hardtack. Classically southern, they originated in Virginia and made their way across the mountains to Kentucky before traveling north to Maryland. In New England, they’re called sea biscuits because they were staples on whaling ships.

Originally, beaten biscuits were made without leavening agents. The dough was beaten vigorously (for 45 minutes to an hour, about 500 whacks) to incorporate air and develop  glutens in the dough  for a subtle rise. Beaten, not stirred. Beaten, not kneaded.  Back in the day, axes, hoes, clubs, iron bars and hammers were used to beat the dough.   Nowadays, the use of rolling pins or mallets eliminates the need for farm equipment.

Mustard
I’ve been on a mustard-making kick lately. When I discovered how simple it was to prepare, I went a little crazy. With homemade mustard, the textures and flavor profiles are endless. Because it’s Derby season, I hit the bourbon trail.
I tumbled 3/4 cups black mustard seeds and 1/4 cup yellow mustard seeds into a medium sized bowl. After dousing them with 3/4 cups Maker’s Mark bourbon and 1/2 cup water, I let the seeds steep for 2 hours. When the seeds softened, I added 1 tablespoon turmeric, 2 teaspoons paprika, 6 tablespoons dry yellow mustard, 1/3 cup pure maple syrup, 1/4 cup brown sugar, salt and 1/2 cup apple cider vinegar. I poured the mix into a heavy cast iron skillet, brought it to a boil, reduced it a simmer, and let it rip for 5 minutes. When the thickened mustard cooled down, I pureed  it with an immersion blender (leaving enough whole grains for texture) and slid it into the refrigerator to chill.

Biscuit Dough
While beaten biscuits are a cinch to make, they’re not for the faint of heart because the process is incredibly labor intensive. It’s a messy business. Very messy. Trust me.
I broke with tradition by sifting 2 1/2 cups all purpose flour 1/2 teaspoon baking powder, and 1/2 teaspoon salt into the bowl of a food processor. After pulsing 1/4 cup chilled vegetable shortening into the flour, I added 1/2 cup cream and 1/3 cup water. I pulsed the mix until it formed a wet loose dough ball and dumped onto a well floured board. Using a floured rolling pin, I beat the biscuit dough, folding it in after every 5 to 10 whacks. Although I lost count of the total whacks at around 280 beatings, the dough was smooth and blistered after 45 minutes. Beaten biscuit dough. Yep. A cinch. Everything within 5 feet of my work surface was covered in flour dust. Everything, even our cat. It was hysterical.I pulled the dough into a small ball, cleaned the kitchen, mopped the floor, dusted the ceiling fan, and took a long hot shower.
Refreshed, I revisited and embraced the beaten biscuit dugh.
After rolling out the dough into a 1/3 inch sheet, I cut it into rounds with a small biscuit cutter, docked the rounds with a fork and baked in a 400-degree oven until the bottoms were slightly browned, about 20 minutes.
While they were still somewhat warm, I sliced the biscuits in half and filled them with shaved country ham. Paired  with maple bourbon mustard and sprigs of Hoot Owl Holler Farm watercress, the humble biscuits were dressed for a party.

So, beat them or buy them?
Packages of fully cooked beaten biscuits are available at Critchfield Meats or any Taste Of Kentucky retail location.
I’m beating up another batch for Derby Day after I sharpen my ax.

Hamburg is home to Lexington Blazin’ Cats and (Junior) Olympians

Hamburg is home to Lexington Blazin’ Cats and (Junior) Olympians