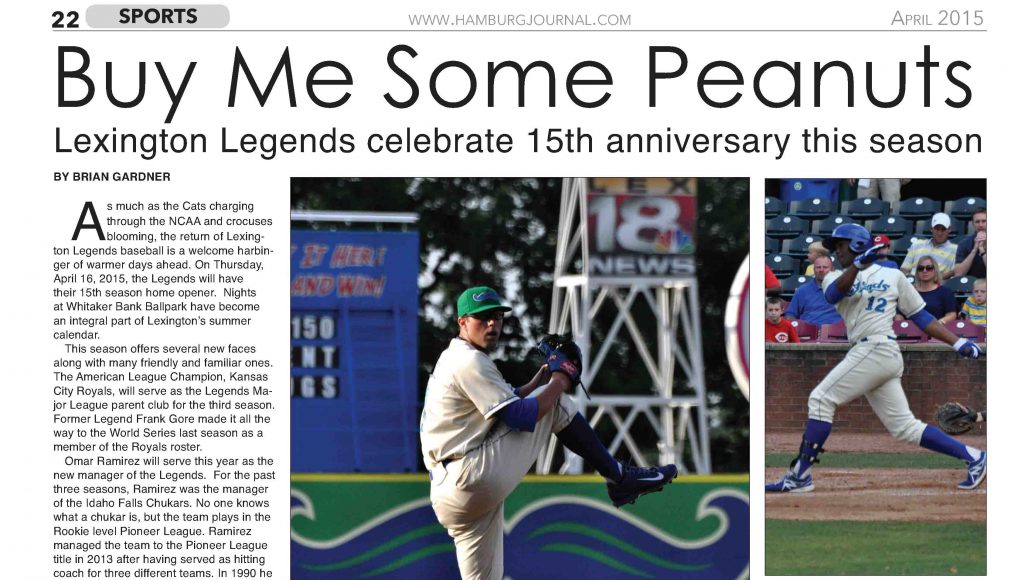 Buy Me Some Peanuts: Legends celebrate their 15th anniversary this season As much as the Cats charging through the NCAA and crocuses blooming, the return of Lexington Legends baseball is a welcome harbinger of warmer days ahead. On Thursday, April 16, 2015, the Legends will have their 15th season home opener.  Nights at Whitaker Bank Ballpark have become an integral part of Lexington’s summer calendar.

This season offers several new faces along with many friendly and familiar ones.  The American League Champion, Kansas City Royals, will serve as the Legends Major League parent club for the third season. Former Legend Frank Gore made it all the way to the World Series last season as a member of the Royals roster.

Omar Ramirez will serve this year as the new manager of the Legends.  For the past three seasons, Ramirez was the manager of the Idaho Falls Chukars. No one knows what a chukar is, but the team plays in the Rookie level Pioneer League. Ramirez managed the team to the Pioneer League title in 2013 after having served as hitting coach for three different teams. In 1990 he was drafted by the Cleveland Indians in the 31st round of the Major League draft.  Ramirez has extensive Minor League experience having played there with the Indians and Houston Astros over eight seasons.  Ramirez will bring this wealth of experience into the Legends dugout for the benefit of these eager players.

The pitching staff will be handled by Carlos Reyes who is spending his eighth season in the Royals organization.  He has served as a Minor League pitching coach and pitched in the Major Leagues for Oakland, San Diego, Boston, Philadelphia, and Tampa Bay.  Damon Hollins will coach the Legends hitters.  This is his sixth season with the Royals and his fifth stop as a hitting coach.  Hollins played in the Majors with three different teams.

Most recognizable to fans among the field staff is bench coach Glenn Hubbard. Hubbard spent 11 seasons in the Majors, ten of them with the Atlanta Braves. In 1988, he was a member of the Oakland A’s American League Pennant winning team. The 1983 All-Star hung up his spikes and first became a coach in 1990.  He spent 21 seasons in the Braves organization and served as their first base coach for 12 years.

One of the highlights of any Minor league season are the promotions and national entertainment acts that come to the ballpark.  The 2015 season will have more than its fair share of fun.  Among the acts scheduled to appear are:

Really, is any more explanation needed?

Canseco hit 462 Major League Home Runs but may be best known as the man who first brought to light the extensive use of steroids in Baseball. He can still hit the ball out of the park and will prove it during his Home Run Derby circuit.

Arguably the best extreme pogo performance team in the country.

The Legends and Kentucky Educational Television work together to bring the lovable Arthur to the Ballpark on Fathers Day. Arthur promotes reading and writing to kids and this day is sure to encourage bonding time with Dad.

His 11th year of fun and skits is sure to be a crowd pleaser.

The Legends and KET continue to partner to bring some of the most beloved TV characters right to Whitaker Bank Ballpark.

He is the “hippest nerd in da biz” and truly must be seen to be appreciated. A cross between a stylish clown and the Famous Chicken, Noodleman provides laughs to fans of all ages.

On the field, the Legends roster changes significantly each season as players advance through the organization.  One player expected to return in 2015 is Ryan O’Hearn.  The first baseman was named an All Star and Most Valuable Player in the Pioneer League while playing for the Chukars.  Logan Moon is also expected to play for the Legends this season.  He was selected by Minor League Baseball as the Appalachian League Player of the month for August and is expected to play right field in Lexington this year.  The roster is not officially set until the first week of April, but it promises to be another exciting summer at the Ball Park.

This article also appears on page 22 of the April print edition of the Hamburg Journal. 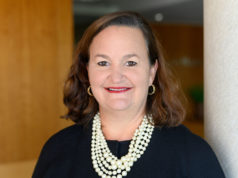 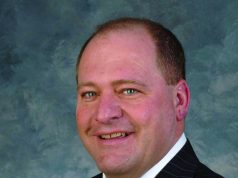 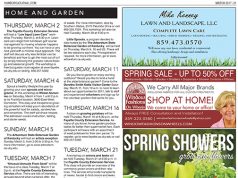