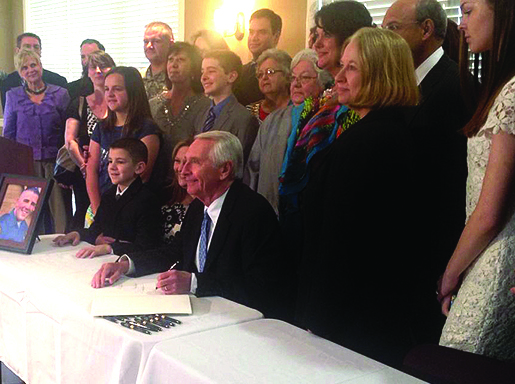 Brandy Durman was a radiography student at Bluegrass Community and Technical College (BCTC) when her husband, Lexington Police Officer Bryan Durman, was killed in the line of duty by a hit-and-run driver on April 29, 2010. Her entire life changed that night and, she depended on the love and support of others to help her through some of her darkest days. Little did she know at the time that she would someday take her personal tragedy and use it for good to help others in similar situations.

The days following Bryan Durman’s death were surreal to Brandy, and she says she had to live from moment to moment, hour to hour, day to day. She has a military background working in crisis management and she knew she had to keep herself together, especially for her son Brayden, who was 4 years old at the time.

“Grief is much more physical than people realize. I remember being in pain. My heart hurt. Grief is both physical and emotional,” she said.

Durman returned to BCTC in the fall following her husband’s death for her first rotation in surgery clinicals but she soon realized that everything about the hospital — the sights, the sounds, the smells, the sight of trauma — reminded her of the night her husband died.

Although she didn’t know at the time what she wanted to do, she knew she could not work in that particular setting.

As she mulled over what to do next and while attending the trial of Glenn Doneghy, the man who would eventually be convicted of her husband’s death, she began working with Victim’s Administration with Commonwealth Attorney Ray Larson. Soon, what could be described as a door to a new beginning was opened for Durman.

A social worker with the Commonwealth Attorney’s office, Mary Houlihan, came to her home shortly after Bryan Durman’s passing. Houlihan was also a law enforcement wife and she walked Brandy through the entire court process, preparing her for what she might see and hear.
She knew all about the law and could discreetly explain things when I didn’t understand something that was said in the court room,” Durman said. “Basically, Mary manages other people tragedies. She also suggested my son see a counselor to help him conquer his grief.”
Houlihan was a pivotal person in Durman’s life the stressful weeks and months of Doneghy’s trial. Houlihan would say something to Durman that would have a huge impact on her future: “People who have experienced trauma are often the best counselors.”

“Her commitment to helping others inspired me to take that direction with my own life. I am so glad I made that choice because I have been able to use my story and my experiences to positively impact the lives of others.”

Durman enrolled in the University of Kentucky College of Social Work in the fall of 2011 and is set to graduate this May, one day before what would have been her husband’s 31st birthday. She plans to attend graduate school at UK and to pursue certification as a licensed clinical social worker (LCSW).

A large part of Brandy Durman’s work while at UK has been with advocacy of stronger laws that require offenders convicted of manslaughter in the 2nd degree or reckless homicide to serve longer sentences. The catalyst for her advocacy was learning that Doneghy, who was convicted and sentenced to 20 years for Bryan Durman’s death, would have to serve only 20 percent of his sentence before becoming eligible for parole under the original statue.

Brandy Durman felt disbelief over the way the law was written, and with the support of local politicians, she began to lobby in Frankfort for policy change. She met with Sen. Alice Forgy-Kerr, R-Lexington, who became instrumental in changing the law.

When Gov. Steve Beshear signed the Bryan Durman Act on April 29, 2013, exactly three-years after her husband’s death, anyone convicted of manslaughter in the 2nd degree or reckless homicide of a public servant must now serve at least 85 percent of their sentence before they can become eligible for parole.

“The College of Social Work has been amazingly supportive while I have been out of classes lobbying. Faculty members as well as classmates have attended sessions in Frankfort and have helped hand out flyers at community events. I can’t think of a profession more supportive than this,” Durman said.

Passage of the Bryan Durman Act was a bittersweet moment for Durman. The new law does not impact Brandy Durman or her family’s situation, but it can change the circumstances for other victims of crime in the future.

“The whole reason I am in social work is to pay it forward,” she said. “I had a social worker hold my hand through the darkest moments of my life, and she spoke for me when I could not speak. Now that I have a voice, I want to speak for others.”