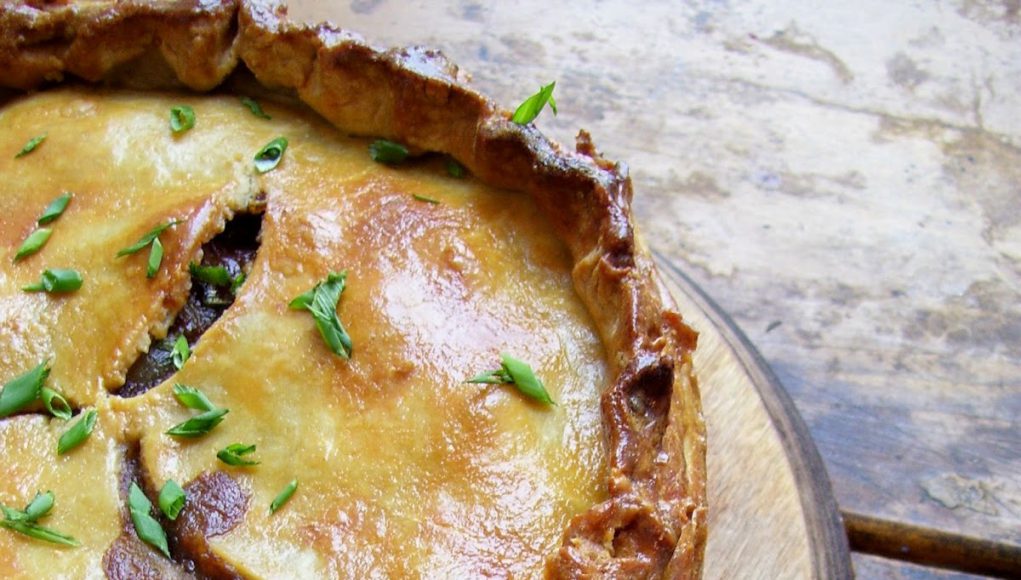 For the Irish in You: Beef And Guinness Pie

You don’t have to dangle backwards from a parapet of Blarney Castle and kiss the Blarney Stone to feel a wee bit Irish on St. Patrick’s Day. Whether slamming back a few pints with Jameson chasers, donning something green, watching a parade with friends and family, or chowing down on hearty Irish fare, most everyone embraces the revelry and spirit of the day dedicated to the patron saint of Ireland.Some of us might enjoy it a little too much. That said, it’s really all about balance. Eat, drink, and be merry. Do it all separately or do it all together. I’m all in for a combination of the three….at the same time. Balance. Meat pies, in general, are fairly straightfoward. Meat + Pastry = Pie. Choose a filling, choose a pastry, and call it a day. Pretty basic. However, under the big umbrella of meat pies, things  can get tricky. Which pastry dough works best for which filling? Shortcrust pastry, puff pastry, flaky pastry, rough puff pastry, suet crust pastry, or hot water crust pastry? Then, double crust, or single crust? It’s all subjective and a matter of personal taste. For something as robust as Guinness steak pie, I went very old school with a double crust hot water lard crust pastry.

I seasoned 4 pounds of Marksbury Farm beef short ribs with salt and pepper, dredged them with flour, shook off the excess flour, and set them aside. After heating 3 tablespoons bacon fat to the smoking point in a large dutch oven, I carefully browned the short ribs in batches until they developed a gorgeous crust, scooped them from the pot, and set them aside. While the pot was still smoking hot, I added 3 tablespoons vegetable oil to the smoky bacon fat. When the two fats melted together, I tumbled 4 sliced carrots, 3 sliced celery ribs, and 1/2 cup chopped onions into the hot oil.

After 1 1/2 hours, I pulled the stew from the oven, loosened the base with an additional 2 cups beef stock, added 2 cups peeled pearl onions, and returned the stew to the oven. At the 2 1/2 hour mark ( an hour later), I pulled the stew from the oven to rest. When the short ribs were cool enough to handle, I pulled the meat from the bones and sliced it into 1′ pieces.  After scooping the vegetables into a side dish, I tossed them with the cooked meat, covered the dish with plastic wrap, and set it aside. I skimmed the glistening  visible fat from the surface of the stock, covered it with plastic wrap, and slid it into the refrigerator to chill.

When the stock chilled enough for the fat to congeal on the surface, I scraped off the remaining fat and draped the gelatinous sauce over the meat and vegetables.

Hot water pastry is an interesting beast. By breaking the keep-everything-well-chilled rule, it goes against the norm. In doing so, the process creates a strong  flaky crust that can withstand the weight of any savory filling.

After sifting 3 2/3 cups all purpose flour and 1 teaspoon salt into a large mixing bowl, I made a well in the center of the flour, poured 2 beaten eggs into the well, and feathered the wall of flour over the eggs. Working over a medium high flame, I melted 2/3 cups lard in a small saucepan before adding 6 tablespoons milk and 6 tablespoons water. When the lard/water/milk came to a rolling boil, I carefully poured the hot liquid around the edges of the flour and used a fork to pull the dough together. When it formed a ragged dough, I turned it onto a well floured bread board, kneaded it until the egg strands disappeared into the dough, patted the dough into flattened disc,wrapped it in plastic wrap, and slid it into the refrigerator for 30 minutes to chill.

I divided the dough with a bench scraper and rolled the bottom crust into a jagged  16″ x 1/4″ circle, rolled the dough onto the rolling pin, and unrolled it over a 8″ spring form pan, leaving a slight overhang. After pinching the dough into the base of the pan, I pushed the dough up the sides, smoothed the creases, patched a few tears, set it aside, and rolled out the remaining dough for the top.

I mixed the room temperature filling with the sauce, spooned the mixture into the pastry case, sprinkled fresh parsley over the filling, brushed the exposed pastry with a beaten egg wash, and carefully rolled the top crust over the pan.  After trimming the edges, I brushed the top of the pie with the egg wash, crimped the edges to form a tight seal, sliced three vents to allow the steam escape, and shoved the massive pie into a pre-heated 390 degree oven.

After 45 minutes, I pulled the pie from the oven, released the spring form pan, brushed the sides of the crust with egg wash, and returned the pie to the oven for an additional 25 minutes to brown before pulling it from the oven to rest.

When cooled, I scattered snipped chives over the top of the pie and sliced it into oversized hearty thick wedges. It was not my grandmother’s dainty beef pot pie.

Deep and complex, the tender meat and sweetened root vegetables melted into the rich mahogany sauce. Although still very present, the Guinness stout relaxed its bitter edge from the long cook. While the brown sugar enhanced the inherent chocolaty roasted sweetness of the beer, it also tempered the hoppy assertiveness.

Eat your beer. One bite at a time.

This article also appears on page 7 of the March 2016 printed edition of the Hamburg Journal.