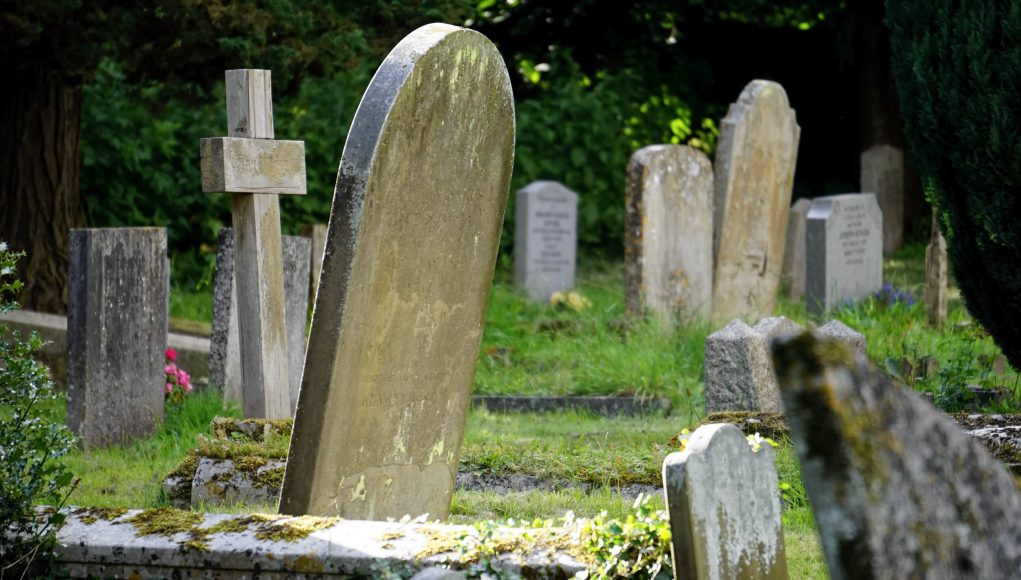 Walking through Lexington’s historic districts, architecture, people and events tell Lexington’s many stories. The myriad of characters from William McConnell to John Hunt Morgan to John E. Madden to Adolph Rupp, walkers and history buffs learn about Lexington’s evolution from pioneer camp at McConnell Springs to the bustling city we know today. However, what happened to Lexington’s original pioneers? Those who helped build the ‘Athens of the West,’ the nation or modern day Lexington? In order to know the present, let’s walk through the past in local cemeteries that tell more tales than a history book.

One of the most unique cemeteries in Lexington sits in front of Wal-Mart on Sir Barton Way in Hamburg where John E. Madden built Hamburg Place Stud Farm in 1897. Madden named his farm after his thoroughbred Hamburg that won enough races to pay for the 235 acres. The farm became a major center of breeding for thoroughbred racing until his death in 1929.  Known as “The Wizard of the Turf,” John E. Madden bred Kentucky Derby winners, Triple Crown winners and the dams who carried them. Madden believed in honoring the horses who worked so hard for him deserved a resting place more befitting their championship nature. He is quoted as saying “Some horses deserve to be buried.” Originally, he buried Plaudit, Nancy Hanks, Star Shoot, Sir Barton and many others on the farm itself.

Preston Madden, John E. Madden’s grandson, said “The Maddens moved the horse cemetery 300 yards to its present location in 2005 to accommodate the Winchester Road widening project and keep the site open to the public.

Madden also said “Hamburg Place Horse cemetery is our gift to the Lexington Urban County Government at no cost to the tax payers of Fayette County. Ultimately, my grandfather wanted the horse cemetery to be open to the public so the Madden Family moved it.” Anita Madden designed the new cemetery to include additional Madden horse graves. Preston Madden’s horses include Bel Sheba, Pink Pigeon and TV Lark. The bust of John E. Madden faces the back entrance so the walking tour comes full circle around the horse shoe.

On East Seventh Street, houses and an auto parts store overlook the African American Cemetery #2. This first African American cemetery in Lexington began burying in 1820 with the interring of former slaves but didn’t become an official cemetery in 1869 after the Colored People’s Union Benevolent Society purchased the property for that specific purpose.

A smaller grave, dedicated to “Joseph Scott A Jockey,” shows the earliest recognition of the African Americans experience and influence in the thoroughbred racing industry.

Also in the African American Cemetery #2 lie the remains of soldiers known as the Buffalo Soldiers who fought in the Spanish Civil War.

Other veterans include Union Army soldiers and Clarence Espy, a member of the 369th US Army Infantry Regiment known as Harlem Hellfighters who during World War I. He and his unit won the Croix de Guerre for gallantry in action in 1919.

Thanks to a grant received in 2010, the history club at Henry Clay High School, run by social studies teacher Christopher Snow, researched and made walking tour signs that highlight the significance of those buried: “(The members of) The Henry Clay History Club were amazed at the hidden stories contained in the weathered stones that fill AAC@2. We found Buffalo Soldiers, members of antebellum fraternal orders and former jockeys hiding in the rows of tombstones. It inspired our ‘forgotten history exhibit’ project in 2016-17.”

Just off downtown Lexington sits the majestic Lexington Cemetery where many of Lexington’s colorful historical figures rest in peace, most notably Henry Clay.

Henry Clay stands at 120 feet in the center of the cemetery surrounded by his family on a local limestone Corinthian column erected in 1857. Nearby lies Gen. John Hunt Morgan, known for his daring raids on the Union Army during the Civil War.

Another prominent Lexington family buried in this site is the Todd family, in-laws to President Abraham Lincoln. Mary Todd Lincoln lies near her parents and siblings and has become a walking tour of its own. Gwen Thompson,  executive director at the Mary Todd Lincoln House on Main Street in Lexington, said “Our ‘House Divided’ walking tour explores the complex story of our community’s homefront during the Civil War. As a slave state that did not leave the Union, Kentucky was divided during the war and Lexington had residents who supported each side.

The Lexington Cemetery maintained a position of neutrality, setting aside ‘soldiers’ grounds’ for the burial of both Union and Confederate troops, and permitting sympathizers on each side to be buried there. The personal stories of those buried in Lexington Cemetery is a great way to explore our community’s complicated past.” ‘House Divided’ guided walking tours take place at 2:30 p.m. Sundays during the month of October, meeting at Henry Clay’s mausoleum.

For other Kentucky history buffs, this figure found in Lexington Cemetery is “The Baron of the Bluegrass” University of Kentucky Mens Basketball Coach Adolph Rupp. He died in 1977 and his headstone reflects his success as a basketball coach in his tenure at UK.

Another grave to head to in earnest is that of Jim Varney. Born in Lexington in 1949, the actor began his career by studying Shakespeare at The Barter Theater in Virginia and performing in local theater productions, one of his roles performed at Danville’s Pioneer Playhouse in 1973. After his character Ernest P. Worrell took off in commercials, Varney switched mediums to TV shows and movies in the 1980s and 90s, capitalizing on “Hey Vern.” He died in 2000 of lung cancer and lies near his parents.