Home Food How to make Benedictine at home 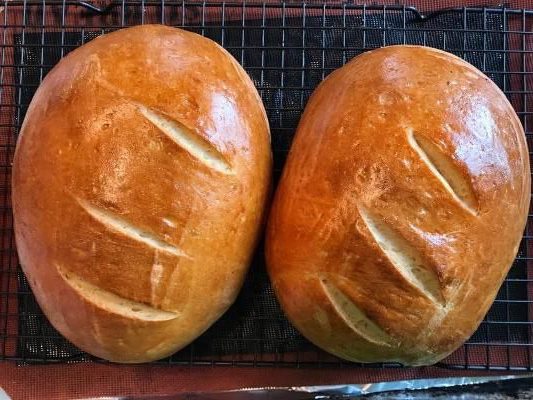 I’ve mopped my kitchen floor four times in the last five days. I’m not a mopper. Because of the new normal, our housekeeper is self isolating at home. So, now I mop.

We’re living through crazy times these days. Navigating grocery stores, markets, curbside pick-ups, deliveries, and drive-up windows while maintaining proper social distancing in full protective gear can be a challenge. It’s really hard to avoid people. They’re/we’re everywhere. Hopefully (and thankfully), most folks have a safe harbor to ride out what seems to be an unyielding storm. I take refuge in my kitchen. On any given day, I end up covered in flour from baking things I would never bake in real life and making more fresh pasta than I ever would in real life. This isn’t real life.

Even in normal times, I keep a well stocked pantry. For years, I’ve gotten ribbed for saving stuff. I toss little, if anything, away. Everything has a purpose or an eventual purpose in another form. Waste not want not. I pickle, ferment, and put up almost anything and everything. I never dreamed a time would come, like now, that my little goldmine would be worth its weight in gold. Right now, it’s all about the pantry and……time.

For a cook, the luxury of time is everything. Time for marinating and brining. Time for stock making. Time to think things through. Time for patience. Baking is science. Baking is a lesson in patience. First things first, I’m not patient and I’m not a baker. At all. Even in culinary school, I squeaked through that part. I’m not much of a rule follower, either. Baking has rules. Big time rules. Even though I can barely follow a basic recipe without fiddling with it, self isolation has afforded me the time to be patient, pay attention, play along, and follow the rules.

Every morning at 6 am (after copious amounts of coffee), I mise en place meals for the day. Planned, prepped, and ready to go, I turn my attention to my flour collection. Bread. Pasta. Rolls. Biscuits. Croissants. Dumplings. Pie. Quiche. Turnovers. Hand Pies. Cinnamon Rolls. On and on and on. With time, anything is possible.

In my case, it’s mostly out of necessity. Most of my food deliveries are haphazard affairs. I order quickly to meet the limited delivery windows. In doing so, I forget things. When I needed breadsticks for sopping up pasta sauce, I made bread sticks. We reached a point when we needed sandwich bread, so I made rustic white loaves.

“There’s never enough time” used to be my mantra. Now I cherish the time. It’s widely believed that sometime between the 1893 and 1899 Derby races Jennie Carter Benedict, the celebrated Louisville caterer, restaurant owner, cookbook author, and businesswoman, created her iconic Benedictine spread for crustless tea sandwiches. After graduating from Fannie Farmer’s Boston Cooking School, Benedict returned to Kentucky in 1893 and opened a catering kitchen in her backyard. Eventually, she became so successful that she moved her business in 1900 to downtown Louisville and opened a restaurant/tearoom. As her restaurant flourished, she became a powerful businesswoman, active humanitarian, and cookbook author. Her Blue Ribbon Cookbook was first published in 1902 and went on to be reprinted several times, most recently in 2008. Her recipe for Benedictine didn’t appear in her Blue Ribbon Cookbook until the 2008 reprinted edition. While some of her recipes have fallen out of favor, some are still staples on Kentucky tables. Her recipe for Benedictine put her on the map and has stood the test of time. Along with mint juleps, country ham biscuits, and chocolate pecan bourbon pies, Benedictine is a Kentucky Derby tradition.

I added 1 tablespoon active dry yeast, 1 tablespoon sugar, and 1/2 cup warm water to the bowl of a stand mixer. When it became foamy and alive, I added 3 cups Weisenberger Mill all purpose flour and 1 teaspoon salt. After incorporating the yeast and flour together with a wooden spoon, I added 2 cups warm water, 1 stick softened unsalted butter, and 3 1/2 cups additional flour.

I blended the mix, attached a dough hook to the mixer, and let it work for 3 minutes before scraping down the sides, setting the speed to medium, and then letting it rip for 10 minutes. When the shaggy dough turned smooth and tacky, I turned it out onto a breadboard, kneaded it by hand for a few minutes, smoothed the dough into a ball, placed it into a buttered bowl, covered it with a dish towel, and set it aside until it doubled in size.

After two hours, I punched down the dough, divided it in half with a bench scraper, and worked each half into 9 x 5 rectangles. I folded each rectangle into thirds, placed them seam side down into 2 buttered 8 x 4 metal baking pans, tucked in the edges, covered the pans with a dish towel, and set them aside.

When the loaves doubled in size, I slid them onto the middle rack of a pre-heated 375 degree oven for 30 minutes. When the crusts were honey brown, I pulled them from the oven, turned them out onto a wire rack, and let them cool to room temperature.

Down the stretch…
Benedictine.
To green or not to green? Truth be told, I haven’t a shred of moral objection to green food coloring. I simply have lingering angst from far too many over tinted and over minted chocolate mint cakes served up to me as a kid back on the farm in Western Kentucky, so I omitted the green food coloring and used what is considered to be Jennie Benedict’s original old fashioned recipe reprinted in Winning Bluegrass Recipes: A Cookbook, published in 1985.

After peeling and chopping a medium sized cucumber, I pureed the pieces in a food processor, scooped the pulp into double lined cheesecloth, and squeezed the juice into a small bowl. Without cleaning the bowl of the processor, I repeated the process with a peeled, halved, and chopped medium sized onion. I added 3 tablespoons of the cucumber juice and 2 tablespoons of the onion juice to 8 ounces so ened cream cheese and mashed it together with the times of a fork until it was somewhat smooth. A er seasoning the Benedictine with a pinch of salt, black pepper, and cayenne pepper, I briefly blitzed the mix with a handheld blender until it was light and creamy.

The finish line.
I sliced the fresh white bread into 1/2” slices and spread generous amounts of Benedictine onto each slice, smoothing it out to the ends of the crusts.

After thinly slicing 2 large unpeeled English cucumbers on a mandolin (a vegetable peeler would have done the job), I cut them in half lengthwise and shingled the slices across the bread on a diagonal, overlapping the peeled ends over the centers until each bread slice was covered. Using a very sharp knife, I cut the crusts from the bread and sliced each piece in half before finishing with shaved radishes and Gary Farm pea tendrils.

This article also appears on page 24 and 25 of the May 2020 print edition of Hamburg Journal.