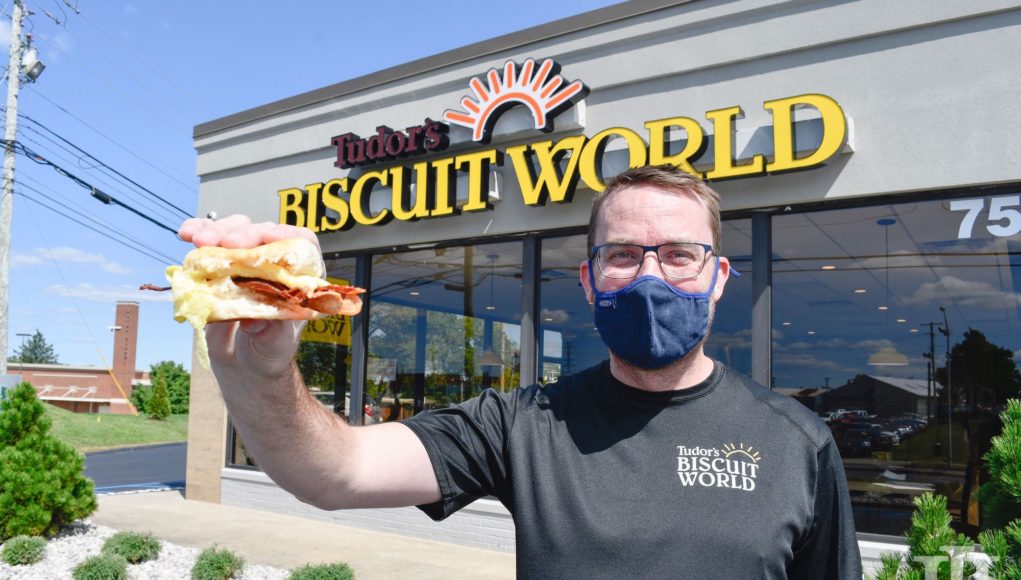 Bring on the Biscuits

It might be time to change your morning commute. Tudors’s Biscuit World is opening on E. New Circle Road.

Tudor’s Biscuit World is a family-owned, fast-food chain specializing in scratch made biscuits and breakfast foods.

A restaurant chain based in Huntington, W.V., Tudor’s Biscuit World has finally found its way to Lexington by way of family. Sam Creviston is opening the new location with his wife, Kristin Tudor Creviston, and her brother, Patrick Tudor.

“That’s the thing about our biscuits,” says Creviston. “Where you might want to eat one and a half to two at most places, one here is going to fill you up.” Along with a mighty lineup of biscuits, the menu features breakfast foods like platters, sandwiches, french toast sticks and wraps, which in Crevistons’s opinion, are better than the biscuits and platters. Breakfast is served all day, with six lunch items available starting at 11 am.

The lunch items include a cheeseburger, pulled pork sandwich, and a BLT, which is offered as a lunch item but customers can order it all day long.

“If you look at the menu, you’ll notice a lot of the biscuits have names. Like Mary B, bacon, egg and cheese, and The Ron, sausage, egg and cheese, both of those are people. Any biscuits that have names like that are named after original customers or delivery drivers who brought products to the first Tudor’s from the beginning in 1980” says Creviston.

Creviston predicts the most popular platter in Lexington will be the low carb platter, which has three eggs made to order and two sides of meat. He says this is the first of hopefully several Tudor’s locations in Lexington, with hopes to congregate to surrounding/satellite towns.

Situated along New Circle Road, the drive-thru will attract morning commuters who use New Circle or pass the Winchester Road corridor on their way to work.

It will initially open as a drive-thru only. Tudor’s opens at 5:30 am, but Creviston says they’ll have at least ten pans of biscuits made up by the time they open. The lunch menu will be available from 11 am until 2 pm, when they close.