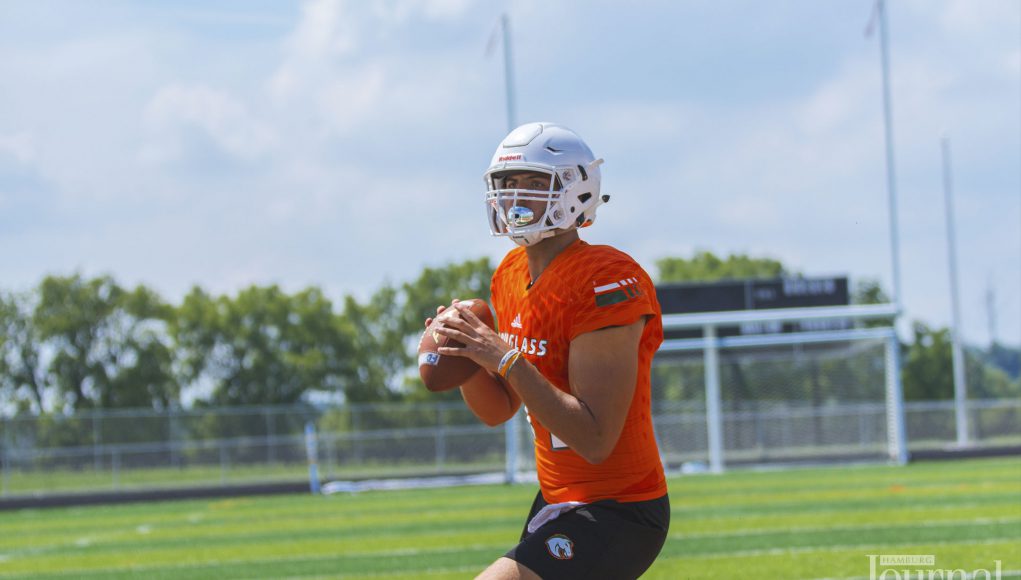 Broncos warm up for scorching season It’s still the sizzling summer offseason when we visit the Frederick Douglass Broncos. The team is preparing for its second season after an impressive debut 10-3 outing in 2017 which saw the team advance to the state quarterfinals.

Practicing without pads and divided into teams of orange and white jerseys, Broncos players battled in 85-degree heat, anxious to show the coaches their improvement.

“We’re a championship program from day one!” one coach yells to fresh recruits.

Broncos head coach Brian Landis is on the field, patrolling the defensive side of the ball, and the sharp bursts of his whistle pierce the humid air.

“We did some good things last year, but it’s nowhere near where we need to be,” Landis says. “Our guys understand that the bar has been set and we’ve got to do the little things right that’s going to give us opportunity for more success moving forward. The end goal is always going to be the same and we’re always trying to do things to reach that.”

“…the people in this area are just hungry for football and want to see a good product and it’s up to us to deliver that,”

Building a program and developing a winning culture from the ground up isn’t an easy task, as Landis discovered. Last season, the staff only ran one defensive call because it was all the newcomers could handle.

The fact that Landis was in his first head coaching position, assembling a team with no established chemistry that had never played together — and still won 10 games — is a testament to the work ethic and direction of this team and staff. “The big thing is, you’re taking guys from five different schools who all come from a different culture and trying to introduce them to our culture and getting them to do things the way we want things done,” Landis said. “That was the biggest challenge and finally having a whole year under our belt, the transition has been much smoother this year. Kids know what to expect now. They know how we want them to work. They know their assignments.”

If there was any doubt as to how the Hamburg community would rally around the newly formed school, that was quickly put to rest at last fall’s Jamboree (the first scrimmage) when the fans packed the new stadium to cheer on their team. Attendance was so high, Landis said it felt like a college atmosphere.

“That really tells me, the people in this area are just hungry for football and want to see a good product and it’s up to us to deliver that,” Landis said.

With the stands filled with orange and green, Hamburg’s team defended their home turf in 2017 by going 7-0, leaving the neighborhood bursting with pride. Landis says, “I call this area of town, ‘The City of Hamburg.’ It’s Hamburg, Kentucky because it is its own little community. It’s awesome.”

Landis knows that being the neighborhood newcomers comes with a target on your back with the Lexington schools gunning for the Broncos. But as Landis tells it, at the end of the day, if the FDHS Broncos want to get to where they want to go in 2018, “you got to beat the ‘team up north’ [Scott County] and they wear red and all of our kids know who that is.” After having their season end in a 48-13 loss to the Cardinals, it’s no surprise that Landis’s squad has payback on the mind.

As of press, the Broncos have six players with division one offers, including quarterback Cameron Jones, a six-foot-eight pro-style quarterback with a monster arm who’s committed to the University of Cincinnati after fielding multiple offer letters. The transfer has made a lot of progress since January.

As a giant with a chiseled jaw, incipient beard, and baritone voice, Jones looks like a grown man cast as high school quarterback in a Friday Night Lights re-boot. But he’s really a teenager from the beautiful mountains of eastern Kentucky, who grew up in a town of 733 people, and loved fishing for everything from catfish to crappie.

Jones, who likens himself to a mixture of Ben Roethlisberger and Carson Wentz, wears No. 14 in honor of a childhood friend who died in grade school. Growing up, Jones played in Perry County and played center and linebacker before he was moved to tight end.

His parents always knew he had a one of a kind arm though, and wanted their son to have the opportunity to quarterback. That’s when the decision was made for Jones to attend his hometown school Knott County Central where he threw for 2,646 yards and scored 33 total touchdowns as a junior.

“They gave me the opportunity to play QB and I fell in love with the position and I feel like that’s what position I’m meant to play,” Jones says with gratitude for his hometown.

He transferred here during his junior year, having heard great things about Coach Landis and Frederick Douglass, knowing the program was something special. Landis told the young quarterback that if he wanted to be a part of a state championship, they would have to outwork every team in the state. It was a mentality that Jones embraced.

Hamburg isn’t a pit stop before he takes off to wear the red and black of the Bearcats in 2019. He knows why he’s here. He knows what he has to do. He’s here to be a quarterback.

“I’m a QB that’s going to outwork everyone,” he says earnestly. “I know that hard work is going to get you what you are searching for. I want my team and other people to see the way I work and I want that to push them and motivate them to work the same way,” Jones said. “It’s my life, it’s what I love to do. When I’m on the field I feel like I’m at war. So, I’m going to take what the defenses give me and break them down little by little, and I really like to take shots. You have to take shots at the QB position just like you have to take shots in life.”

Making the move to the bigger program appealed to Jones because of quarterback coach Jim Franklin, who could help the young man fix his mechanics and grow as a leader.

“Coach Franklin knows more about the game and the QB position than anyone I have ever met,” Jones says, expressing appreciation for a coaching staff that stressed good nutrition and training, helping him drop from 260 to 242 lbs and speeding up his footwork in the process.

Having Jones behind center adds a huge weapon to the offense that the Broncos didn’t have last season. Franklin says, “Cam is gifted; he’s got a very strong arm and being in a totally different program, it’s been a chore for him to get the terminology down but he’s very dedicated.” He adds, “He’s a good team manager. That’s what we need —a manager on the field —and he does a good job of doing it.”

Jones isn’t the only one who will be counted on in the quest for a state championship. FDHS will rely heavily on returning proven talent as well as some guys who have made their mark on the roster since last season.

“Montaveon Bean, who was our starting quarterback last year, we just got to get the ball into his hands. He does so many things so well. Damarco Fishback, our running back, he can take it to the house at any moment,” Landis says.

“Offensive linemen Jacob O’Buck, his growth, he’s a mauler. He’s going to move a lot of people around, and on the defensive side of the ball, Tre’Jwan Scott is the best nose guard in the state.” Fresh into his coaching career with the Broncos, the experience has already been rich with special moments for Landis. Seeing his team members grow has been the most rewarding part of the last year for him. When they first started the program, the discipline was out of step, as were the expectations, but according to Landis, where they are today, they’re starting to do things right.

“That’s the greatest feeling in the world when you got other kids holding other kids accountable,” Landis said.

The FDHS Jamboree is August 11 at 8 pm when the Broncos will take on Madison Southern.

This article also appears on page 8 and 9 of the August 2018 print edition of Hamburg Journal.