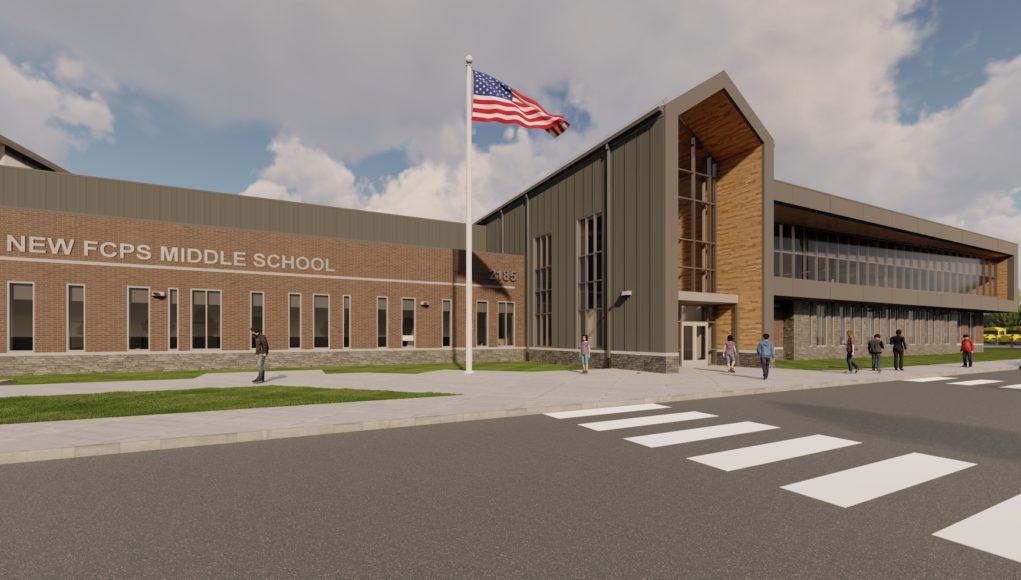 For nearly two decades, Edythe J Hayes, has held the title of Fayette County’s “new” middle school. But that’s about to change. A lot has happened in the seventeen years since Hayes offered the very best and latest and greatest. An economic meltdown occurred in 2008, technology has reinvented itself at least a dozen times in the intervening years, safety and security concerns in 2004 were very different than they are today, and a global pandemic came along in just the last year, with everyone asking themselves if Covid 19 has actually transformed into Covid 21.

As is to be expected, the forthcoming middle school is able to lift very little of its inspiration from its predecessor. “But that’s the goal, right?,” says D. Robert Deal, AIA, LEED AP, KCID, NCARB of JRA Architects, who serves as the Project Lead for the new middle school. “You shouldn’t wait all this time [what’s it been, 17 years?] for it to be the same.”

The new Polo Club middle school will debut as a pre-academy model, the first of its kind in terms of middle schools in the district. The two pre-academies will focus on VoAg and Medical Services.

“With the pre-academy model,” says Deal, “We’re trying to let students know what opportunities are ahead of them. A lot of it is inspiration. The sooner we can get to those students, the better.”

He continues, “And that’s really what this building is all about. Middle school is transformational, it really is. Capturing students as early as we can and inspiring them with what their opportunities going forward can be. It will be the best middle school in the district, without a doubt.”

Before FCPS purchased the land, the site was owned by the Madden family through their Polo Club 1 LLC and Ausbrook Polo LLC businesses.

The history of the site and the surrounding horse farm inspired the exterior design of the building. “The design has taken advantage of the beautiful views around that site,” says Melinda Joseph-Dezarn, who serves as the in-house architect for FCPS. Deal explains that the goal with the design was to focus on what it means “to be a new middle school in Fayette County with a VoAg pre-academy model in a green field site surrounded by horse country.”

And what does that mean exactly? Creating a building that reflects both the area and agricultural industry of Kentucky. The facility features a barn-esque structure with dark metals often seen on tobacco barns. Cues were taken from Kentucky’s scenery like details of stone work and rock wall facets, similar to that of Paris Pike, along with plank fencing and pitch roofs.

While making sure to maximize the acreage of the land, the design team was determined to leave greenspace and not fill the entire site with buildings. All classrooms have windows and each wing is situated so that students have optimal views of the property when moving between classrooms, especially when using the staircases.

JRA Architects is the architecture firm behind the design of the soon-to-be brand-new Hamburg middle school. The firm also designed E.J. Hayes and Squires Elementary School.

The design process was a collective endeavor among a team that included architects, engineers, and a steering committee who met over a dozen times—thanks to Zoom—throughout the past several months.

With a tremendous amount of input from a variety of school district representatives, even the most finite details of the facility’s design were considered.

The band, orchestra, and vocal rooms are surrounded by practice rooms, all of which are strategically situated across the hallway from the stage. The performance stage, with its high articulated ceilings, is located off of the cafeteria and usable for multiple functions. The gymnasium has its own separate main entry from the building for after hours use and activities.

Each of the four wings of the building is catered to a grade level. The middle wing serves as the elective wing, featuring a consumer and life science classroom along with two art rooms. One art room for traditional hands-on media and the other is for digital art.

As for one of her goals for the building, Joseph-Dezarn says, “We talk about having buildings that provide collaborative space. I have really pushed for that here.”

With collaboration in mind, each wing features a makerspace that is centrally located and can be used as a collaborative space. Also dubbed as ‘computer rooms,’ these spaces feature an abundance of mixed-used, movable furniture for project-based learning and wireless technology so that devices can move where needed. “We’re having a lot of fun,” says project lead D. Robert Deal in terms of the design, adding, “There has been so much support from the district about taking this building type, a middle school, and what can it really be for the 21st Century?”

“Mental health is one of the things that we have been trying to improve on in Fayette County,” says Joseph-Dezarn. In addition to an administrative area at the main entry, several administrative and guidance offices are placed in each wing and embedded throughout the facility so students won’t have to travel far if a need arises.

The middle school and elementary school will be located between 2185 and 2345 Polo Club Boulevard.

This article also appears on page 10 and 11 of the August 2021 print edition of Hamburg Journal.