Home Cover ‘Tails’ from the Farm 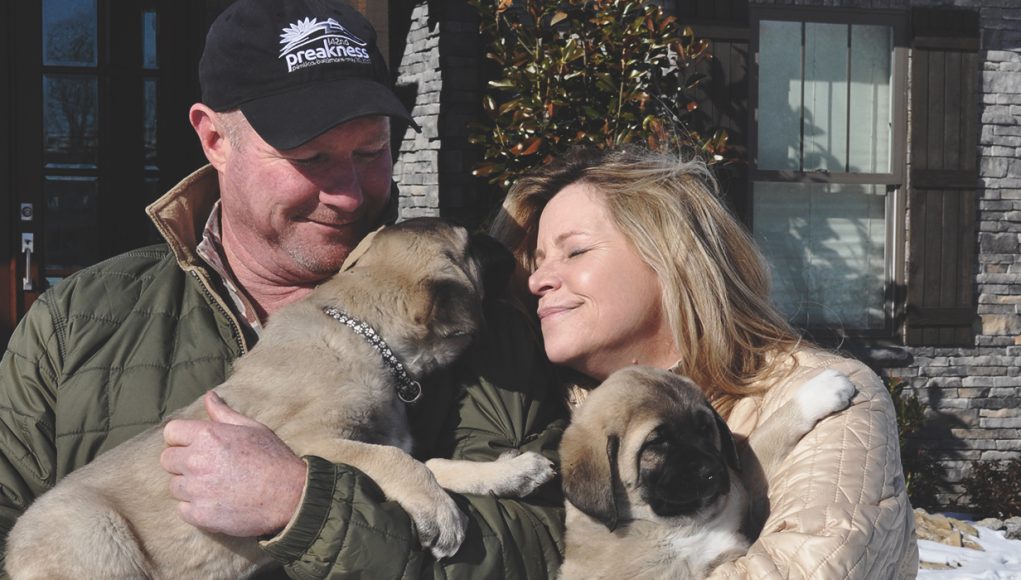 A snowy 90-acre farm located off Old Richmond Road serves as the setting for the pride and joy of Evans Mill Cattle Company–the Kangal dogs.

The Kangals, an impressive breed of livestock guardian dog originating from Turkey, are known to fight off predators such as coyotes, wolves, bears and anything it perceives as a threat.

But to Marc Guilfoil and Elisabeth Jensen, the husband and wife owners of Evans Mill Cattle Company, they’re not only considered great workers, they’re considered family.

“I love these dogs more than any dog I’ve ever had,” Jensen said. “And I never thought I’d have more than one or two dogs or that I would become a dog hoarder but I just love all of them.”

Jensen, an education advocate who also serves as the executive vice president for the Kentucky Equine Education Project and the president and executive director of the Race for Education, developed a love for the Kangal while living in Eastern Turkey for five years.

The mayor of the city where the Kangal is originally from, gave Jensen a Kangal puppy but due to her traveling and working all the time, she couldn’t keep it.

When she and Guilfoil, both staples in Kentucky’s equine community, got married a couple of years ago, they wanted to buy a farm, have cows, and the whole nine yards.

“Marc [Guilfoil] grew up with cattle and figured cattle is a lot easier than horses. So we bought the farm out here and have had cattle for about two years now and one of the challenges that a lot of people in Central Kentucky have with cattle are the black vultures,” Jensen said. “When the calves are born, the black vultures attack the calves. A lot of times they don’t kill them, they mutilate them so you have to put them to sleep. I thought to myself, ‘This is a job for the Kangal. I now finally have an excuse to actually get this dog.’” Finding a Kangal in the United States can be difficult after they banned the export of them from Turkey due to people crossbreeding them with pit bulls and a lot of the dogs that were left were too old to breed or the bloodlines were too close to breed.

Guilfoil and Jensen searched for a year and finally found one in Western Kentucky that was already two years old. Her name was Sasha (Sasha Fierce). She became the best working dog and despite having never seen cattle before, she immediately took to them. In fact, on the first day, Sasha had a standoff with the bull and ever since then, the bull backs up when Sasha approaches.

Kangals are naturally very protective and instinctive but they also learn from older dogs. The couple got a head start with Sasha so when they brought in four other Kangals–Betsy, Blutarsky, Genghis Khan and Malik Monk, Sasha acted as a mentor for them.

The crew of Kangals work in pairs on the farm with one staying with the herd and the other on patrol. Betsy and Blutarsky run one section, Monk and Khan run another. Sasha, the alpha dog, will manage the back half with them when she returns from maternity leave.

“You’d never think as gentle as they can be with people that they can be equally as fierce,” Jensen said. “But if you put her on a leash, she just melts. She’s so docile around people.”

Sasha’s maternal nature came in handy when she delivered a litter of seven puppies before Christmas. The training for these working dogs starts with socialization even as puppies and the training process for a working dog is always ongoing.

“Every morning, we go to all of the fields where we have cattle and first, I walk around and check all of the cows so they understand the cows are the important thing before I mess with them,” Jensen said. “One of the characteristics of the dog is that they’re independent thinkers because they have to be able to judge who should be there and who shouldn’t be there when they’re out in the field.”

When they bought Sasha, the seller told them that Kangals are not food driven at all. You could put a steak in front of them and they will just look at you and walk off. According to Guilfoil, when the cows are in the field, that’s where they want to be. They want to be around the cows and protect them. If there’s a calf, the dogs know the difference and will hang with the calf and sleep right beside it. Their bond to the cattle is incredible to witness. As the cows line up to eat, Betsy positions herself beside them and starts eating cow feed before running to wind through Jensen’s legs.

The couple recalls the time Blutarsky, a rescue dog, had never seen a newborn calf before he arrived at the farm. Jensen cautioned him to be careful because he might think it was something foreign and attack. But the two bonded immediately and that calf has been his calf the whole season.

Once after Jensen had been treating a sick calf with antibiotics (chasing it around for daily shots), she arrived the next morning to see that Sasha had already separated the sick calf from the other 19 cows in the corner by her dog house. Her intuitive instinct amazed Jensen.

“When growing up, we raised mostly Blue Heelers. I’ve seen about every guardian critter they have out there, there’s nothing like this breed,” Guilfoil said. “We want to get the word out about these dogs because there’s a lot of farmers out there. There’s always going to be coyotes and if you’ve got a mature herd of cattle, you don’t have to worry about coyotes that much — but it’s these vultures. They’re protected by the federal government. We just want to give people another option. They’re good dogs to have. They love women and children.”

Guilfoil, a lifelong cattleman from Glasgow, Kentucky and a University of Kentucky alumnus with a degree in agriculture, is the executive director of the Kentucky Horse Racing Commission where he has worked for 30 years.

Dressed in a hunter green coat and jeans and a Preakness ball cap, Guilfoil’s Southern drawl can still be heard over the sound of the crunching snow underneath his boots.

“When Elisabeth started talking about these dogs and what they do, I was really pessimistic,” Guilfoil said. “I thought there was no shot that they were gonna do that but these things have won me over and I was completely on the other end of the spectrum. I wouldn’t trade them for the world. You can go out at midnight and you walk out to the cows, the cows are laying there and the dogs are laying there. They’re always with them. If they hear a noise that’s not right,  they go and they disappear in the dark and about five minutes later they come back. They’re 24/7 on the job. I love it. They’re hard workers.”

He knows it will be hard to let the puppies go. As the son of a veterinarian, Guilfoil was surrounded by animals his whole life and had all sorts of pets. His attachment has made him  cautious about getting close to Sasha’s puppies. “We took all of the pups to the vet today and I told her that the reason I wasn’t trying to mess with them was I didn’t want to get attached to them because there’s a couple of them that have some personalities that I really like,” Guilfoil said.“There’s one that we see eye to eye and if someone comes and picks him, I don’t want to get attached to him but it’s business.”

He can rest easy knowing the process to get one of the Kangal pups is extensive due to his wife’s thorough interview where references are required and an understanding of the purpose for the dogs. Jensen will even use Google Earth to see if the applicant has a farm or a fence.

Guilfoil’s family grew up on Cleveland Road near the farm where he now resides with Jensen. When Jensen said they should move from the city and get a farm, Guilfoil knew where to go. “I about tore the doorknob off to get out there,” Guilfoil laughed.

For Jensen, it’s a lifestyle she has dreamed about since the days of growing up in Indiana. It’s why she came to Kentucky. She was a Disney exec when she came up to the Bluegrass State for a horse sale and never went back.

She’s a Renaissance woman, using her voice to make an impact whether it’s education, horses, the urban services boundary or her being on the Board of Directors of the Kangal Dog Club of America to get the message out about this breed.

As the cold starts to set in, Jensen closes the gate to the farm, leaving Betsy and Blutarsky to watch the cows and heads back toward the house. Jensen and Guilfoil each pick up a puppy to cradle while they huddle together for warmth.

“I love the breed and I hope they will become more popular and that people will be more responsible with them in the United States,” Jensen said. “There are a lot of dogs that people have got and that they have not been able to handle and didn’t realize what a responsibility it is and they end up in rescue. If you don’t manage dogs like this properly they can be dangerous. We just want people to understand the responsibility that comes with these great dogs.”

This article also appears on page 7 of the January 2018 printed edition of the Hamburg Journal. 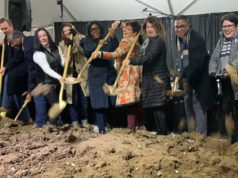