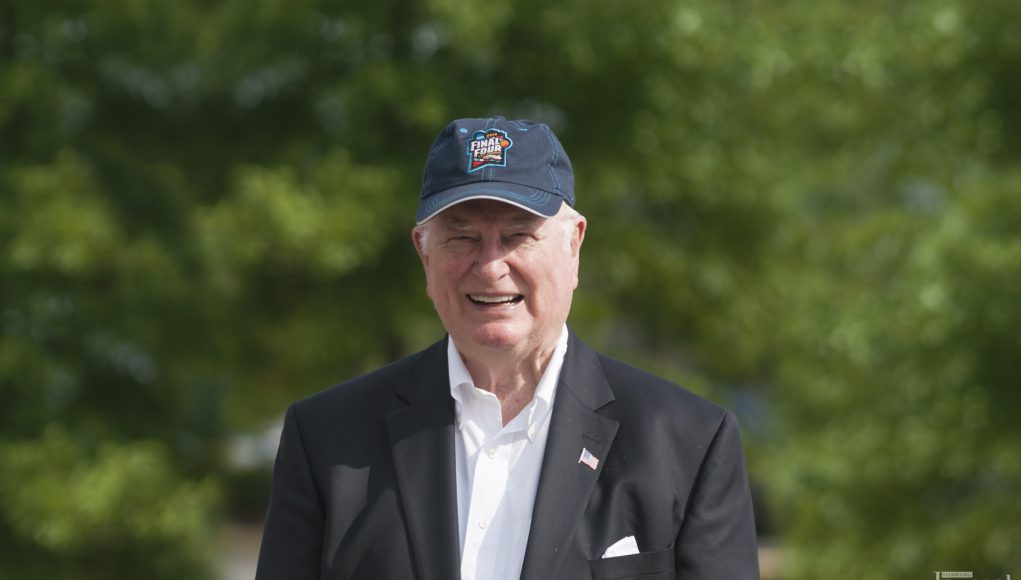 Host with the Most

The neighborhood is invited to have breakfast with a legend

He never sets an alarm clock, but he still wakes up at 4 am every morning. By 6 a.m., he’s already at his neighborhood Panera which doubles as an office for him to meet with people, whether it’s for business or to mentor ambitious youth.

Host will be the speaker for the Legends Breakfast at Liberty Road Faith Fellowship on Saturday, August 18 at 9 am. Host is credited by many with the development of the NCAA Final Four radio broadcasts and the expansion of UK’s radio network into the largest in the nation.

He’ll be relating his life experiences from his time as a pitcher for the Ashland (KY) Tomcats and Kentucky Wildcats through his political career as a candidate for lieutenant governor and the development of Jim Host and Associates into a national player in the media business.

Over a recent breakfast at his Panera “office,” Host said, “Your obituary is written by other people, what they think, not by yourself… You can help write it by always doing what you say you’re going to do — you always perform, you always execute and you under promise and over deliver. “

Between occasional interruptions from fellow regulars who stop by his table for quick conversation, he reminisces about what it was like when he was first trying to forge his path and how a little help can go a long way.

Before he created Host Communications and changed the sports media world, Host faced a few bumps in the road. In 1972, Host had just lost the race for lieutenant governor and only had $107 in the bank. He owed $76,887 because he had refused to accept any campaign contributions.

While contemplating his next move, he went to Ray’s Barbershop. While in the chair, the barber suggested Host speak with the landlord about taking the space upstairs while he was getting back on his feet.

“I moved my desk and two file cabinets, which I still have, into this apartment which had a lightbulb in a ceiling, a bathtub, no blinds on the windows and bare floors — and that was my office,” Host said. “I had two kids (4 and 7), a house payment and two car payments and no income.”

Two weeks later, Lexington Mayor Foster Pettit and the county judge called and said they’d like to buy Host lunch. He jumped at the chance of a free meal. Over lunch, they told him they wanted him to be the first executive director of Lexington Convention and Visitors Bureau. Host asked, “How much?” They told him it would be $18,000 a year, and he’d get a secretary, an office, and a car.

“Will you hire my company?” he recalls asking them. “My company will do all of this for you and I want an $18,000 a year retainer.”

He says, “They thought they’d found the mother lode. I told them all I wanted was a six-month contract and if I don’t do the job for you in six months, then you can fire me. I’ll take the first $1,500 right now.”

They cut him a check, and Host went straight to the bank to make a payment toward the debt accrued from the campaign.

Host handed the check to Jake Graves, the CEO of Second National Bank, telling him it was from his first client. Graves asked, “What’s your company?” Host replied, “Jim Host and Associates.” He had no “Associates” at the time, but he liked that it sounded like it would be a big company. It’s also the name of his current company, which he created after Host Communications sold.

Graves could see that the young man needed a break, and advanced Host and his new company $10,000 for capital, with one condition — that he wouldn’t pay any interest on it for six months.

To this day, Host jots down the five most important things he needs to accomplish each morning and he starts with the most difficult task first so the rest of the day runs smoothly.

After that initial $10,000, what would become the building blocks of a media empire began to fall into place.

Within just a week, county officials solicited Host’s services to see about that “hole in the ground at West Main Street,” or “Civic Center.” Host was commissioned to figure out a way to build and fund what would become Rupp Arena. “I was the first Executive Director and can remember it like yesterday. I said, ‘it should only have one name and that’s Rupp, he built the program for 41 years,’” Host recalls. “I can remember [Lexington financier] Garvice Kincaid saying, ‘I’m not going to vote for that no-good SOB.’ We already had the votes and Garvice was the only one who voted against it. We named it Rupp Arena and it has been that way ever since.”

Host had majored in Radio Arts in college and would later do play-by-play after blowing his arm out during his one year in minor league baseball. He bid $51,887 for the UK radio rights. The $887 was the amount of his interest on the loan. For the 1974-1975 Kentucky basketball and football seasons, Host got the rights.

He kept climbing the sports world’s ladder. While at the NCAA Final Four, he was setting up the engineering with Cawood Ledford and Ralph Hacker when he spoke with the NCAA’s lone two employees and asked them what they’d take for the rights to broadcast games.

Host offered $31,000 for the national rights and NCAA Executive Director Walter Byers had Host fly to his office in Kansas, where he agreed to give Host’s company the NCAA radio rights.

Following a journey that would rival Forrest Gump’s fictional impact on history, Host’s contributions to sports and media continued to blossom. He read a Cleveland newspaper and saw the term ‘Final Four’ used in regards to the national semi-finals. He suggested they trademark it. They listened.

Because of his impact and contribution to collegiate sports, Host is being awarded the Naismith Memorial Hall of Fame Lifetime Achievement Award in September. His success has left him fulfilled.

“When I put my head on the pillow every night, it takes me 30 seconds to go to sleep,” Host says. “I’m totally at peace with myself, with what I’ve done and what I have contributed in life. Every single day, I give 100 percent effort.”

Although he retired in 2003 and sold his original company, true to the Host that took the world by storm in the 70s, he hasn’t let up. Among his many projects, he’s “deeply involved” with Kentucky Wired, and is on a mission to make Kentucky the best broadband state in the nation.

He says, “I intend to continue to go as hard as I can go until God won’t let me go anymore,” adding, “I’m going to try to do everything I can to make things better for Kentucky.”

This article also appears on page 7 of the August 2018 print edition of Hamburg Journal.

Healthy for the Holidays | Getting to know our GFS neighbors