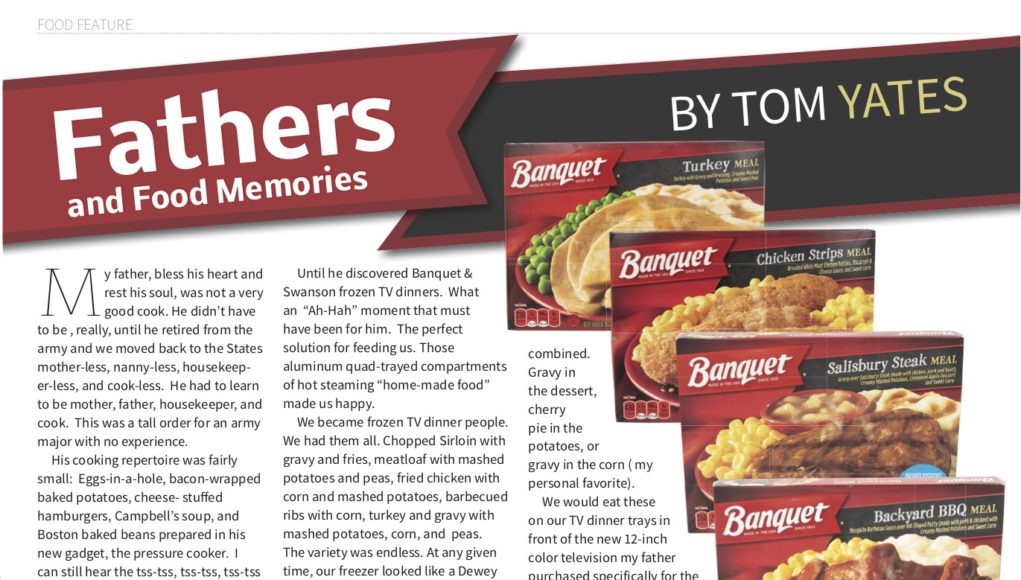 My father, bless his heart and rest his soul, was not a very good cook. He didn’t have to be, really, until he retired from the army and we moved back to the States mother-less, nanny-less, housekeeper-less, and cook-less. He had to learn to be mother, father, housekeeper, and cook.  This was a tall order for an army major with no experience.

His cooking repertoire was fairly small: Eggs-in-a-hole, bacon-wrapped baked potatoes, cheese- stuffed hamburgers, Campbell’s soup, and Boston baked beans prepared in his new gadget, the pressure cooker. I can still hear the tss-tss, tss-tss, tss-tss from that thing pressure-cooking away in the kitchen. Being the mid 1960s, new things were coming out every day and were totally embraced by my father. Every morning for breakfast, we had Kellogg’s new, individual cereal variety-pack selections. The ones with the perforated line down the center and sides. All you had to do was cut the box open, pour milk into the box, eat the cereal, and throw the box away. Perfect. No clean up. Breakfast, done.

Aside from the occasional trip to the beach for crabs or the seldom night out at a Chinese restaurant, dinner was pretty predictable. Beans, burgers, eggs-in-a-hole, soup, or potatoes.

Until he discovered Banquet & Swanson frozen TV dinners. What an  “Ah-Hah” moment that must have been for him.  The perfect solution for feeding us. Those aluminum quad-trayed compartments of hot steaming “home-made food” made us happy.

We became frozen TV dinner people. We had them all. Chopped Sirloin with gravy and fries, meatloaf with mashed potatoes and peas, fried chicken with corn and mashed potatoes, barbecued ribs with corn, turkey and gravy with mashed potatoes, corn, and  peas. The variety was endless. At any given time, our freezer looked like a Dewey Decimal System categorized library of TV dinners, stacked top to bottom and side to side. Breathtaking, really.

All of these dinners came with a dessert of some kind. Either cherry pie, chocolate pudding, chocolate cake, or a yellow spongey thing no one ever ate.  Everything always dripped  and spilled over the sides of the compartments, combining foods that probably should not have been combined.  Gravy in the dessert, cherry pie in the potatoes, or gravy in the corn ( my personal favorite).

We would eat these on our TV dinner trays in front of the new 12-inch color television my father purchased specifically for the Apollo Moon Landing.  We felt special.  We were special.

To this day, I like t.v. dinners. I can’t help it. They have gotten better, but I still like the way the gravy sticks into the corners and caramelizes. I like how the chicken sticks to the bottom of the container like a fancy fond in a saute’ pan when scraping is needed to “get to it.”  I love the barbecue-sauce spattered corn that is inevitable with faux barbecued t.v. dinner ribs.

I love the memory.

And I still don’t mind a little cherry pie in my mashed potatoes.

This article also appears on page 18 of the June 2021 print edition of Hamburg Journal.